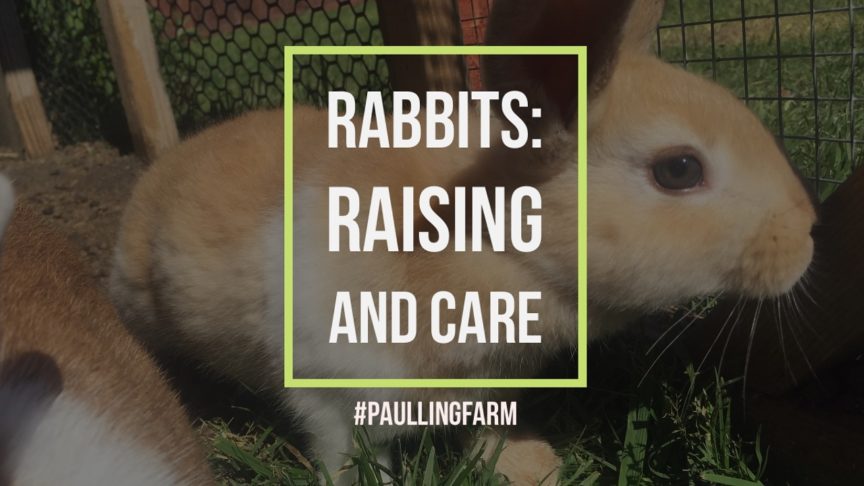 So here’s what I’ve learned about caring for rabbits.

Our rabbits get a lot of play. Many of our friends bring their toddlers over to see the bunnies and I generally feed them by hand for a minute or two before filling up the feeder each afternoon, so they have become very friendly. Many farming sites say “forget about them being pets, they are livestock” but we have really enjoyed them as pets as well, so there is definitely a trade-off. There’s nothing quite like having some of your wife’s friends come over to do yoga and then dumping a box full of baby bunnies in the middle of the room and watching them all squeal. (the girls, not the bunnies).

Rabbits generally don’t mind being held as long as you are calm and you cup their feet in. If their feet are dangling, they are panicking and will scratch you pretty good. I generally have small cuts on my hands from some of the more resistant rabbits, so be aware they can panic if you are not calm.

As with all the other animals we have, there is just an unlimited water source. (A big 35 gallon black jug mounted high) and the rabbits have access to the same little yellow watering nipples everyone else does. (They have their own. They don’t share with the chickens or quail.)

Its hard to measure rabbit feed when there are 8 rabbits all vying for the same feeder, but generally each rabbit gets 3 oz a day of pellet feed. We get a 50lb bag of feed at the feed store for $15. Don’t spend tons of money on little plastic bags of hay at Petco. They can run about $15 for a days worth of hay. Its ridiculous. I buy a large bushel of hay (probably not the correct term) from the same feed store for $10 and that lasts about 5 months. For all the rabbits. Get one of those.

Our rabbits also love treats from the garden, and I will generally pluck some of whatever is in season and let them munch on it. But only as a treat. Not in significant amounts to upset their diet. All their nutrition needs are met in the pellets. Right now, they get grape leaves and radishes. (radishi?)

Bunny run under the chicken roost with two french doors for access to feeder and for playing.

Rabbits are generally ready to breed at 6 months old, but its better to wait a little bit longer. Younger moms are more likely to be a danger to their own kids and you will likely have many of the babies not make it due to neglect.

When you are ready, put the female into the male’s pen. (Not the other way around) and leave her there for about half an hour. Record the date. Provide the female with a “bunny box” for her to nest in. Mine is about 18″l x 12″w x 6″h tall with the top tapering down and opening up in the front. She will build a nest out of hay, straw, grass, and her own fur (which is crazy warm) so dont panic when she starts pulling out her own hair. At right about 30 days, she will give birth. You don’t have to do anything. You will just go out there to find a pile of gross little naked mole rats. They look really weird for the first ten days, until they get their fur and open their eyes, but then they will shortly become incredibly cute. The babies should be generally left alone and the mom will come feed them once or twice a day. You will likely never see this, so don’t panic here either. Mama bunnies don’t like to feed during the day and will likely look like they are ignoring the babies. It’s intentional to keep predators away from the babies. Our pen has an area with access to a dirt floor, and our mama bunny has gotten out a number of times, and its because she is trying to put distance between herself and the babies to keep them safe.

A female rabbit can get pregnant almost immediately after having a litter, but its best to wait at least 6 weeks so her current babies get all the attention they need and the mom can recover. Backyard breeders wait at least 6 weeks, and commercial producers cut that to about 3-4. A female can generally breed for about 5 years, and once every 3 months. If you follow that schedule, you can get upwards of 8-10 babies per litter, which adds up quickly.