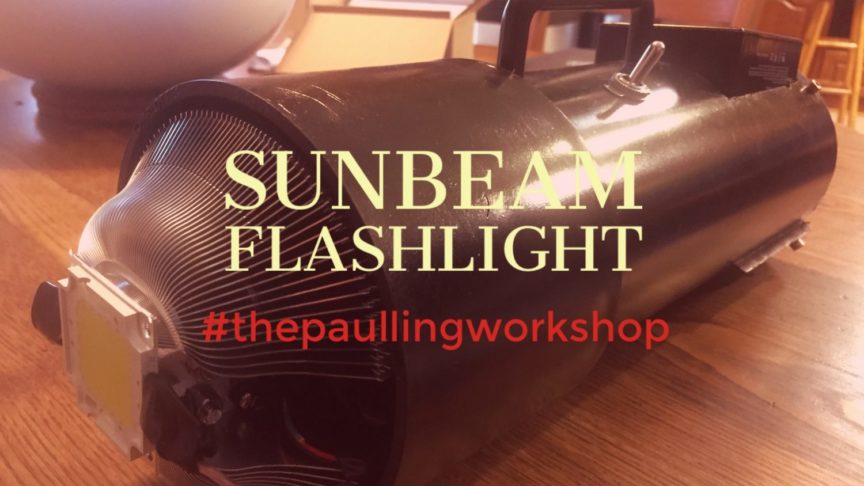 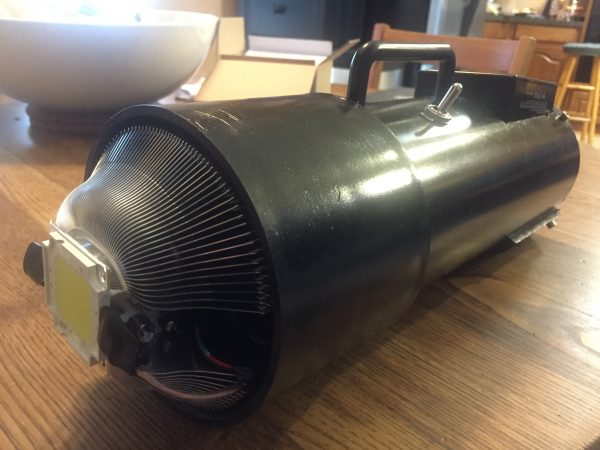 The completed build (minus the lens on the LED)

I’ve been wanting a slightly more powerful flashlight for a while now. I’ve got some brothers-in-law that have built their own flashlights and they are crazy bright and crazy small. I also wanted it to be inexpensive, so mine definitely didn’t end up being small. Its 18″ long and weighs about 2lbs. But it is CRAZY bright. Like it puts my car headlights to shame.

Total cost for me was about $25, but I had some parts lying around. (metal grates, screws, wire, superglue, battery)

You’ll need some tools to put this together:

The quick power disconnect from Home Depot. This allows me to undo the battery with a snap.

So here’s how to build it.

You need a handful of things:

150 W Boost Coverter DC-DC
This boost converter will take a 12v battery and ramp it up to 32V, which is what you need for the 100W LED chip. Power Booster 12V-32V
44mm Lens
This lens will sit on top of the led chip and focus the light. The beam tightens down from 180 degrees to about 60 degrees and increases the intensity of the light by 5x. LED Focusing Lens
100W LED Chip
This is the core of the build. You can get smaller chips (20W,30W,50W) but I wanted it to be as bright as possible. So I got the 100w. 100W LED Chip
12V battery
I had one of these laying around but if you need one, I recommend the 5 amp-hour security system backup batteries, but any 12V battery will do. 12V 5amp-hour Security Backup Battery
Heatsink
The LED chip gets REALLY hot after running for a few minutes. Running it by itself with no heatsink will fry the chip in about 2 minutes. You need a heatsink of some kind. I had a spare CPU heatsink laying around that also had a 12V fan attached, so I made that work, but you don’t need one quite this big. This one should work: CPU Heatsink
Thermal Paste
I use arctic silver thermal paste for my CPU’s when I build a computer, so thats what I used here, and it works great. It forms a bond and keeps the LED chip from moving around: Arctic Silver Thermal Paste
Miscellaneous Parts
I used thick 16 ga speaker wire, but any type of thicker wire will do nicely. I also used some power quick connects so that I can remove the battery quickly and charge it. The switch can be any inline rocker switch. I used a small metal flip switch. The handle is a plastic drawer handle mounted with 2 screws underneath. Black spray paint for a finish. I used high temp grill spray paint because of the heat generated. 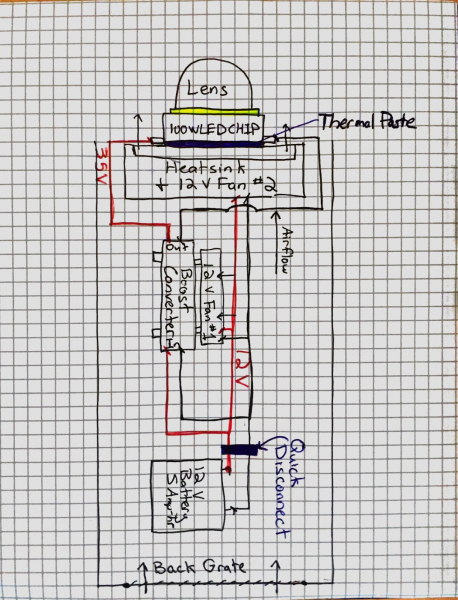 Download the SchematicFull resolution scan of the schematic drawing.

The pieces all fit in an 18″ length of PVC pipe (Mine is 4″ diameter pipe because I have such a huge heatsink, but if yours is smaller you dont need this big of a pipe.

From front to back, the components are as follows:

I also have a secondary, tiny 12v fan that I had left over from another project mounted to the top of the DC-DC power board for additional cooling. Its probably not necessary but I just had it so I used it.

The way my CPU fan is situated, it actually pulls air from the back, over the battery, and out the front over the LED chip. This is probably the opposite of how most CPU fans will work. I could probably try reversing the polarity for the fan and make it run the other way, but I kind of like it.

From the other side of the DC-DC power transformer, the wire connects directly to the LED chip. Its kind of hard to tell which side of the chip is positive and which is negative, but make sure you get it right or you can fry your chip quickly. Power is only meant to flow one way through this thing.

When you get it all wired together, try it out for a few minutes at a time to see how hot everything gets. And definitely don’t look into it. It is literally blinding. I was, and still am, shocked at how bright this thing is, being that small of a light emitter, but its crazy.

Some electrical engineers online have run legit tests on these chips and claim that they do not output or draw the 100W claimed by the chip manufacturer. I’m pretty sure thats true, since my battery life calculations based on draw of 100W show that I get less battery life than I really do, so it tells me it doesn’t draw as much as it says. I know there are more quality LED chips out there, but to me, the difference between 75 and 100 watts wasn’t worth quadrupling the cost of the chip, and whatever the actual output of this thing, its crazy bright. I’ve still never seen a brighter flashlight.

Electrical Schematic – Green is +, Blue is –

The back grate on my build is a CPU fan finger protector that I had a few extra of laying around, and I mounted it to the back of the airflow path just to protect wandering fingers, but its mainly decorative.

I also cut two little feet to keep the flashlight from rolling when you set it down. They are cut from the PVC that was removed for the battery opening (just cut lengthwise in half) and superglued to the bottom. 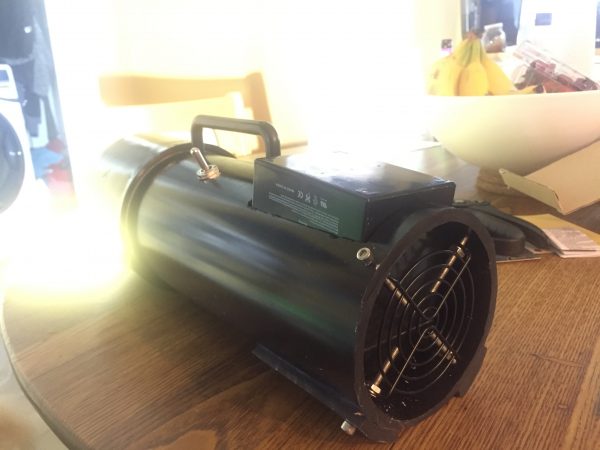 Turned on in my dining room with all the lights in the house on. The light is so bright that it washes out the picture and the phone cannot handle the light output for a good picture.

The battery opening had to be cut because my big battery pack was just too big to fit. If you use a different 12V pack, say some AA’s in a pack, or a roomba battery, or something more sleek, you can probably fit it in there more cleanly. At first, I was really annoyed that I had to do this, but it actually makes changing the battery out REALLY simple. I just pull up, unclip the quick disconnect, and drop in a fresh battery.

If you want to go a little more in depth with this, there are a few mods you can add. 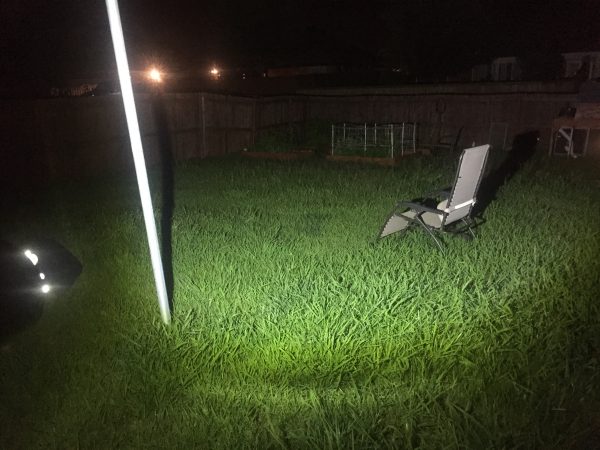 This was taken late at night with no other lights on (except the house lights down the alley). It was pitch black in my backyard with no moon light. The amount of light is hard to capture with an iphone camera and it looks more dim in the picture than in real life.

Our Shop is Live!

Everything you need to build this project is available in our store! Fill your cart up with what you need and checkout with amazon!

Head to the Store