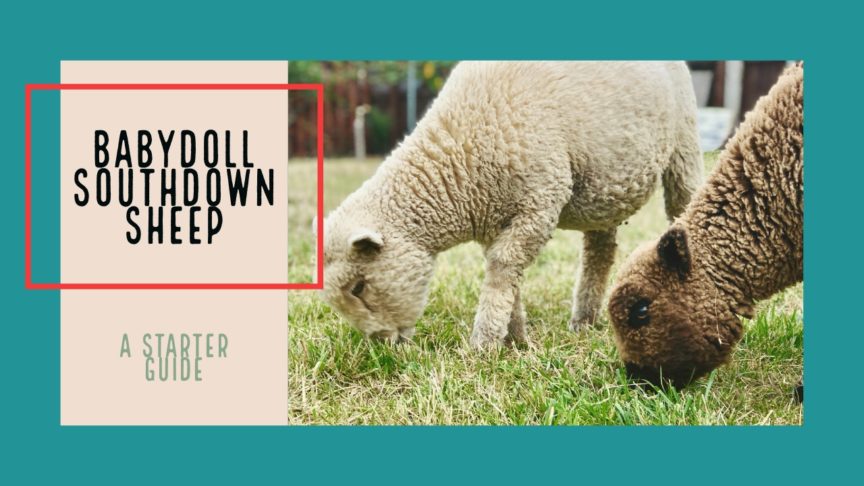 Well, we went and did it. We got two of the fluffiest, softest, cutest sheep in existence and it’s already been SO much fun. So here’s a little bit about who and what they are, for those of you who might be considering them yourselves.

We have two Babydoll Southdown sheep, the white one is named “Nunu” and the brown one is “Rumble”. Follow our adventures on instagram @sheepsinthecity 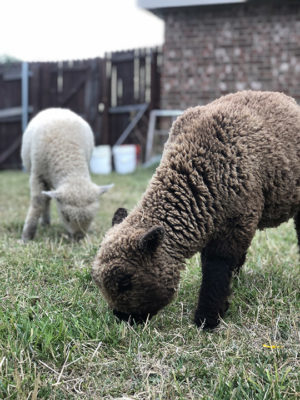 These sheep originally came from Sussex England, also known as the South “Downs”. They are known for their hot/cold hardiness, fine quality fleece, and tender meat. They are extremely tough when it comes to temperature extremes. They were brought to the U.S. in the very early 1800s. They were incredibly popular as a meat breed before the invention of the refrigerator, because their small size allowed all the meat to be consumed before it spoiled. After refrigeration was invented, their usefulness decreased and people moved on to bigger livestock, which provide more meat per head, and the Southdown breed nearly became extinct. That is until the 1980’s, when a man named Robert Mack began to search for as many of the miniature breed as he could find. After nearly 4 years, he had found a total of 350 sheep spread across America, and it’s mainly due to his efforts that this breed is still in existence today. He renamed the breed “Olde English Babydoll Southdowns” and formed a registry. As of this article being written, there have been just over 8000 babydoll southdown sheep registered, two of which are our little guys.

Their numbers are so few that they remain on the Rare Breeds Survival Trust List.

They are very gentle, and stay diminutive their entire lives. They are between 18-24″ tall fully grown, and are about the size of a golden retriever. They are easy to handle, but we’ve found that they can be very fast if out in the open and if they don’t want to be caught. They are most often white, but occasionally be black. (The ‘brown’ one we have is actually black, but the sun lightens the color of the wool.) They don’t like to wander too far from each other, or from structures they associate with safety, and they don’t even test fences.

They are naturally ‘polled’, meaning both boys and girls are born without horns. We’ve found that our two boys have small, hard spots on the tops of their heads where you would expect horns to be, but they are just little nubs. Our’s were originally nervous when they arrived, but after a few days, they started to explore more and more of the yard and have become very friendly, especially when approached with treats. They are fond of daily routine, and in the few weeks we’ve had them, they already respond well to a few commands: specifically, each night when it’s time to put them in the pen, I’ll say “time for bed” and they will start to trudge back toward the pen and head over to their mat of hay they sleep in. 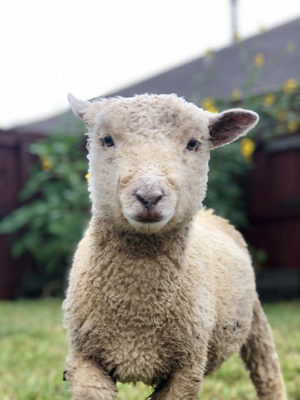 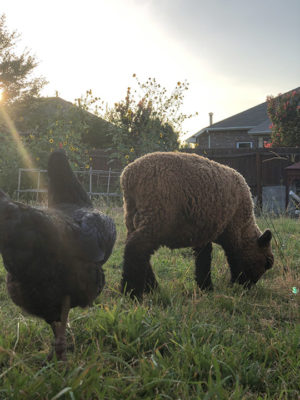 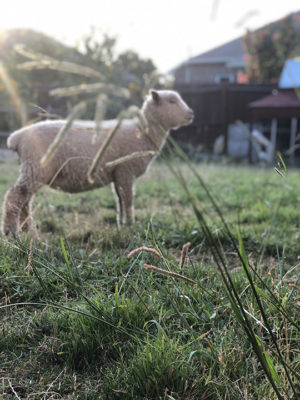 Requirements for Babydoll Southdown sheep are few, but specific. They need a shelter to get out of the rain. It doesn’t have to be fully enclosed, but a 3 sided pen is the norm. They don’t enjoy being wet and water can become trapped in their wool, next to the skin, and get very hot during the heat of the summer. It’s odd, but splashing water on them in an attempt to cool them off can do more harm than good. A better solution is provide a misting fan, or a shaded area for them to recline.

They also really enjoy being outside and although they can be kept in a pen their entire lives, it’s not ideal, and not very much fun for anyone.

They are definitely herd animals. Some breeders won’t just sell one sheep, because they don’t do well alone.

For food, they simply need access to grass all the time. Hay in the winter when the grass is dormant. Occasionally, as treats, I will feed them a few handfuls of grains. Many orchards have begun to employ babydoll sheep because they keep the weeds down and they don’t hurt the fruit, tree trunks, or shrubbery. In fact, I have specifically tried to feed my sheep left over fruits and vegetables and they have no interest in them. Because of their size, they are significantly more economical to feed and maintain that other, larger breeds.

Water is simple: there needs to be access to clean water all the time. I have one self filling dog bowl in the pen where they sleep and night, and I also have a small pond in the backyard that they can lean over and access.

Also, they will need a salt block that contains trace minerals they wouldn’t otherwise get off of hay/grass.

Medical needs are minimal, but you do have to be willing to do a couple of things.

First and foremost, you’ll have to sheer them once a year in the spring, after the dangers of cold has passed and before the heat of summer. You can either hire an experienced sheerer, or you can do it yourself, but know that its going to take some time for each sheep, and it has to be done. You’ll also likely need to trim around their eyes and hindquarters. This prevents “wool blindness” and also keeps them from soiling their wool as they go to the bathroom, which can scald the skin.

Another constant thing you have to take care of is hoof trimming. They grow constantly, like our fingernails, but are much harder because they are made out of the same material composition as horn. You’ll need very sharp sheers, made specifically for this, and it’ll need to be done every couple of months. Sheep are highly susceptible to foot issues and hoof rot, and it becomes increasingly difficult for sheep to walk if their hooves are not trimmed. It’s very easy to do, but you do have to do it.

Babydoll Southdowns are an ancient, purebred sheep line, so they aren’t as susceptible to foot rot and intestinal parasites as other, more modern breeds, but you still have to pay attention to these issues, and its beneficial to treat intestinal parasites early and often. This is done with a “drench” that is applied via syringe into the back of their mouths.

It’s still possible to raise them as a meat provider, but if that’s your goal you might be better suited to a larger breed. Here are the primary reasons for owning this breed:

Pets: They make excellent pets, especially wethers, which are males who are unable to reproduce. They never develop the aggressive adult hormones and will remain ‘lamb-like’ their entire lives. Their small size and gentle nature makes them especially excellent companions for small children, the elderly, and for people with smaller spaces to house them. Sheep have no defensive ability, and at their most aggressive, can only push their heads into you. Simple training when they are young gets rid of this behavior and you are left with an incredibly sweet, fluffy animal.

Gardeners: They are only interested in grasses and hay, and they will not disturb the trunks of trees or shrubbery. Babydoll sheep have been used to great success in orchards and vineyards, as they constantly weed around the fields, and leave fruit undisturbed. They leave the ground well groomed and fertilize the soil as they roam.

Wool: Their wool runs around 20 microns thick, and is incredibly soft to the touch, especially after washing. It has more barbs per inch than any other wool type, which makes it ideal for combining with other wools to increase their ability to strand.

Companions: In addition to being great pets, they make great companion animals for other livestock. They have an incredibly calm demeanor, which can sooth other animals that are more prone to panic.

If you’d like to read an extremely comprehensive rundown on physical characteristics and what they should be before purchasing, this site has already created a great writeup of the subject, so I’ll just link to it here.

Get everything on Amazon

Here is a link to our constantly updated equipment list for sheep care! This stuff works with all sheep, not just babydolls. 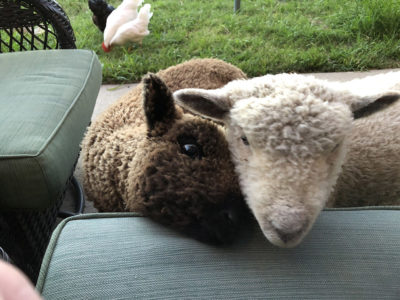 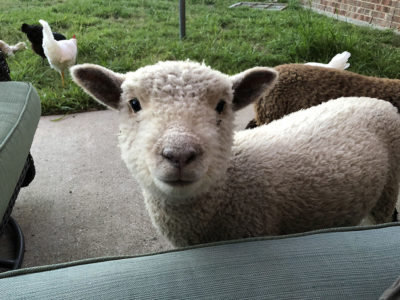 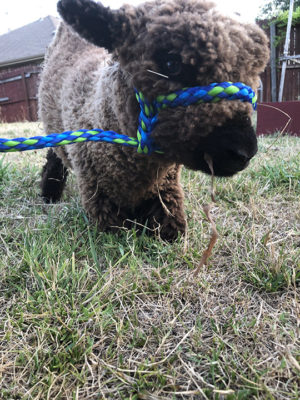 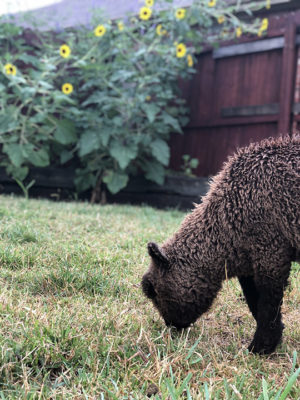 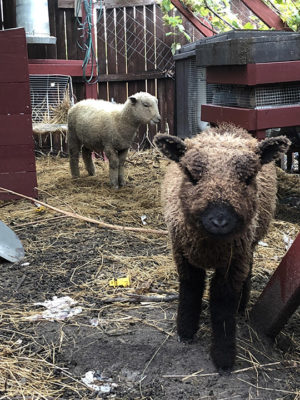 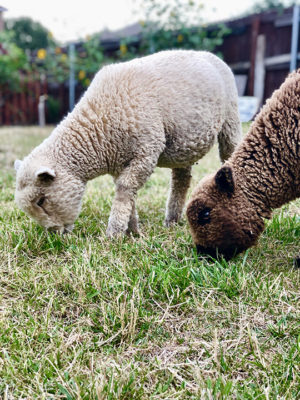