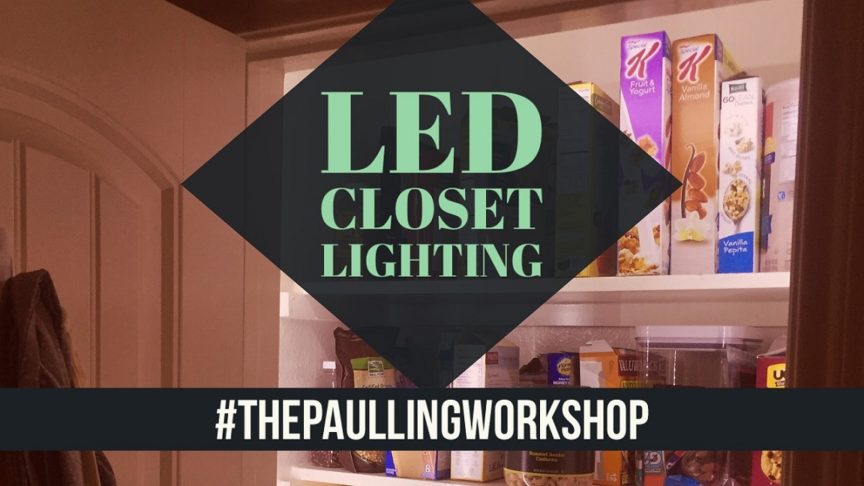 When we moved into our house a few years ago, none of the storage closets had any lights. That makes finding things in there very hard, and I’m already bad at looking for stuff. So I decided these closets needed lights. I wanted something that would turn on automatically when you open the door, disperse light around the closet evenly and not just in the top, and wouldn’t take too much energy to run if the door was left open by accident. So here’s what I came up with.

Its a simple LED light strip mounted around the inside of the door frame, all the way around, pointing in towards the closet to provide front illumination. It’s much more evenly distributed than a top down lighting system where you have a bright top shelf and dark floors. It’s got a simple magnetic switch that is operated when the door is opened or closed and it can be attached to a simple dimmer to control how bright the light levels are. The system can be run from an LED driver plugged into a wall outlet, connected to a 12v battery if an outlet is not available, or run up into the ceiling to connect to a normal socket (which I dont have in my closets but you can use if you want to retrofit an existing closet light).

One of our closets doesn’t even have close access to an outlet, so it was set up to run off a security system 5 Amp-hour battery that sits on the floor inside the corner of the door frame, and I occasionally take it out to recharge it. (About once every 9 months, so not too annoying.)

Here’s how to do it.

The LED light strip is the core of this build. Measure the height (x2) and add in the top width of the door frame, and then add about another 1′ of extra. This will be enough to get you around the frame, but you may want to include a few feet of light strip underneath some of the shelves as well, so add a few more feet there. (I’d recommend doing this only if you have a lip on the front of your shelves, as seeing the LED strip directly is very bright. You want them hidden.
The LED Supply Driver is what converts your house 120V system to the 12V required to use LED light strips. These drivers come in all shapes and sizes, but the 30W driver provides enough power for a whole closet full of lights without being overkill. It’s fairly bulky, about 2″W x 1″H x 12″L, so make sure you ahve some place to mount it. Mine is underneath my kitchen cabinets.
The Magnetic Switch is what you will stick to both the door and the door frame, very close together, and that will allow the door to control whether or not power flows to the LED lights. If you don’t use this, you will either need to install some kind of light switch or be ok with the lights being on all the time. (kind of wasteful)
The LED Dimmer is a control knob that can be wired into the system to control how much power gets to the lights. Just like a dimmer you probably have in other rooms of your house. I originally wanted one of these in the closet to control how bright the lights are, but I found max brightness to be ok at pretty much all times (unless you want to get a late night snack and the light is overpowering in the darkness) You can use this, or not.
Other things you will need: Wire. I normally use standard 16 ga speaker wire for my LED projects, but if you don’t have some, grab some from the link. Wire Strippers – for stripping wire. Soldering Iron – for making connections between wire and LED strips. Note: they also make little push on connectors if you’d rather do that. Light Duty Stapler – for securing wiring to the wall. Electrical Tape – for finishing wire to wire connections. 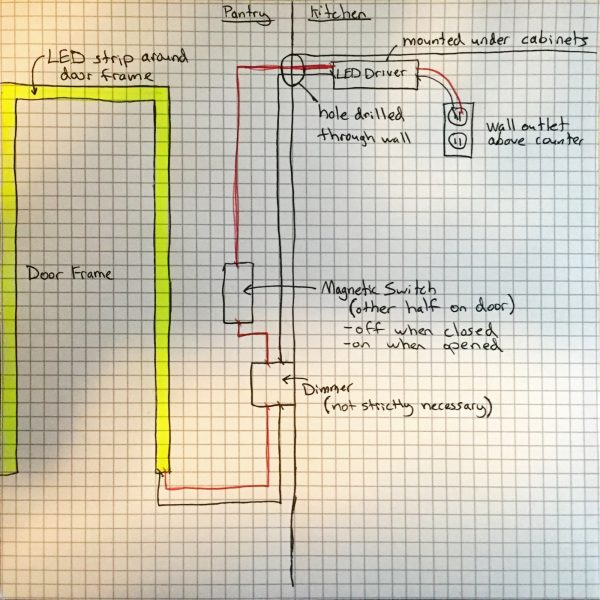 Lets first look at the diagram on the left.

There are two wires, black and red, that flow through every part in the build. We start at the wall outlet under the kitchen cabinets, flow through the LED driver to convert to 12V power, go through a small hole in the wall, down the inside of the closet, the red wire goes through the magnetic switch, and then meets up with the black wire at the dimmer. The dimmer outlet then connects to a new set of wires that runs to the LED strip, which then runs all the way around the door.

Once you physically place the components, stick them in place with some double sided tape (the LED’s should have sticky tape on the back already) and begin laying out your wire. I used a light duty upholstry staple gun to make my wires run straight and sit tight against the wall and this keeps them from looking unfinished and droopy.

If you want to connect more than 1 strip of continuous LED’s, you can. You attach the strips in parallel, all connected to the same point at the dimmer. Red and black wires go from there out to each LED strip, no matter where it is. Each LED strip has its own connection.

Your build will likely look a bit different than this. You may not have to go through a wall to get wires into the closet. You may not have a closet near an outlet, but you could tap into a ceiling light fixture with a screw in outlet that would take the place of a normal bulb. You may choose to run a closet off battery power. (I’ll include a picture of this at the bottom)

How Many LEDS to Run

You can only run as many LEDs as your driver is rated to handle. This particular drive is 30 Watts, and each foot of this LED tape requires 1.5 watts, so you could run, at max, 20 feet of light tape. Ideally, you don’t want to max out your supply because it will run hot, so this 30w driver is designed to work perfectly with these 16.5 foot LED strips. If you need more lights, for something like a master bedroom closet lighting system, get a bigger driver. 50w or 100w or even bigger.

The LED driver mounted under the kitchen cabinets and wires run through the wall. (1/4″ hole drilled)

The wires coming through the wall into the closet.

Wires coming from driver to connect to magnetic switch (on right) and dimmer (on left). Dimmer outlet ports connect to LED strip.

LED strips can either be cut or bent carefully around corners. I found you don’t have to worry about cutting and reconnecting if you don’t mind perfect corners. 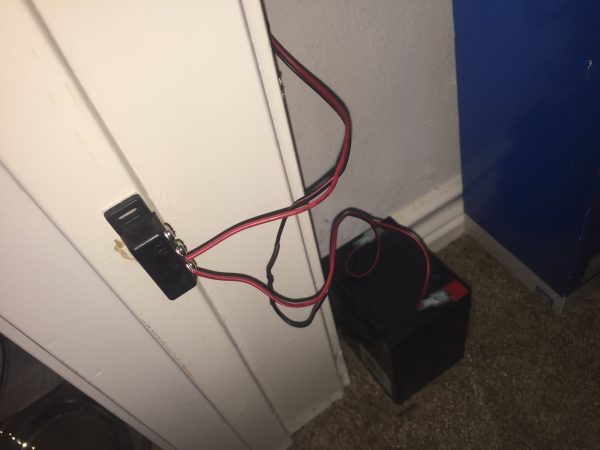 Instead of a driver, this closet uses a 5amp-hour 12v battery sitting on the floor connected straight to the magnetic switch and lights. No dimmer here. 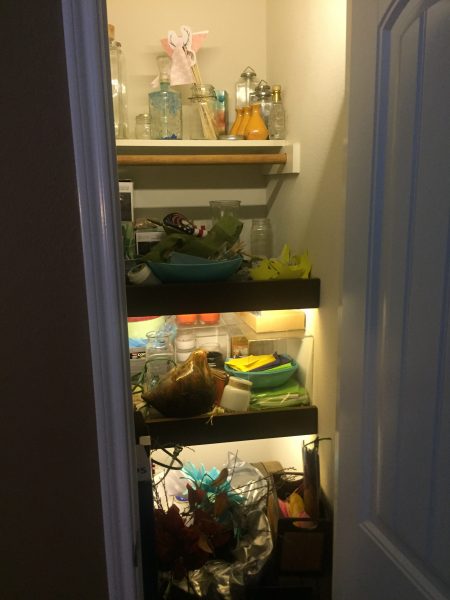