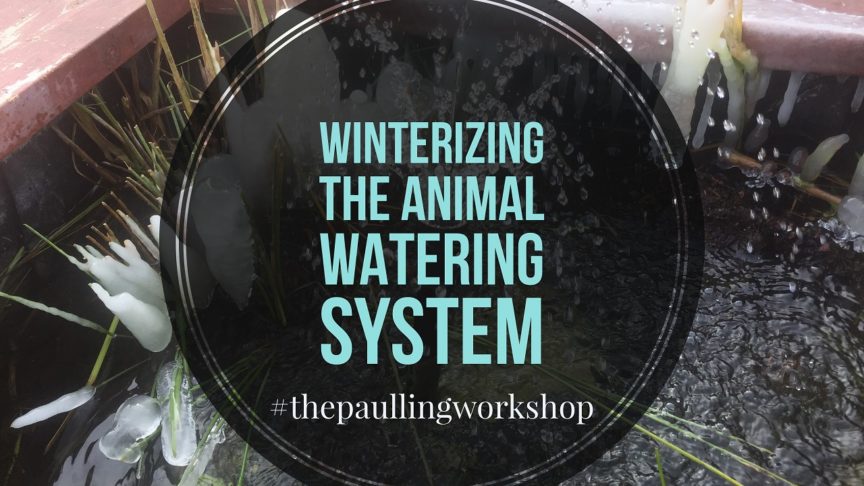 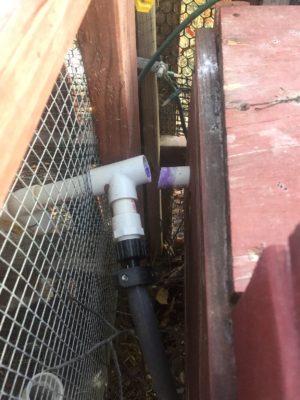 Back when I built the chicken coop, I knew the most annoying part of keeping animals would be keeping the water filled and clean. Food is easy. Fill up the feeder once every 3-5 days and let them do their things, but the water has to stay clean to keep disease, flies, and dehydration at bay. Putting out a dog bowl of water works, but its dirty in 10 minutes and chickens walk in it, quail try to take baths in it, and rabbits poop in it, so that didn’t work for long.

I heard about these little metal and plastic nipple waterers that are similar to what youd see in a petstore hanging on the side of the gerbil cage, but they attach to PVC pipe and can water a number of different animals. So I decided to get some of those and create a system that would store water elsewhere and then run it into each of the animal pens, and then in each pen they would have access to a couple of the hanging nipple droppers. At first, I used a 5 gallon bucket, but in the heat of Texas summer that drains fast. We’ve got 5 chickens, 7 rabbits, and 30 quail, so that barely made it a day. So below I am going to outline our most recent setup for watering everything, and then I’m going to outline how it broke when it froze last week and how its now been winterized to prevent freezing.

For the watering reservoir, I went to my local feed store and bought a $40 food safe 55gallon plastic barrel and painted it black. Its solid, thick, lightweight, and clean.

The waterers are Saddle Style Oasis Poultry Water Nipples – I got a 10 pack. Make sure to get a few extra.

To work with PVC, you’ll need the following tools:
To determine how much piping and fittings you need, I recommend drawing out your pens and figure out the easiest and shortest path you can take to get water into all the different pens. If you can make a complete circle around the pens, go for it. If you have to double back on top of the first pipe like I do, so be it. You’ll need:
You’ll also likely need: 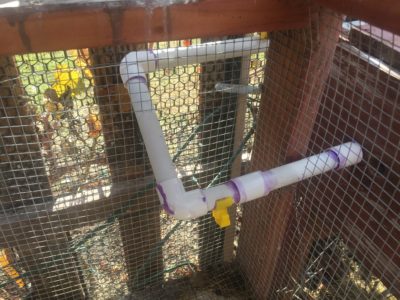 The end of the run – looping back to run toward the reservoir.

The setup is as follows:

If you haven’t cemented PVC together before, it’s really easy, but potentially messy, so wear some gloves. Start with the purple primer. Pull out the little ball applicator and run a ring of purple primer around the lips of fittings and the outside edge of the long pipe. Basically anywhere they will make contact. This stuff is slightly caustic and begins to melt and soften the edges of the PVC to make it seal together better, but it will also make your skin peel. Its not too painful, but it is annoying. Immediately after, even before the purple is completely dry, grab the applicator for the clear cement and run it around the inside edge of the fitting a couple of times. This stuff dries fast, so be ready to connect your pipe into the fitting immediately after putting the cement on. Press the pipe into the fitting and twist back and forth until its all the way seated. 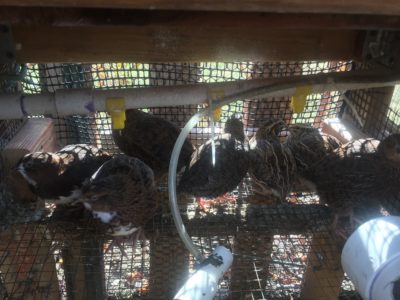 Watering line running through the quail pen. Notice the old pipe that has burst and is laying on the bottom of the cage.

This setup works really well, and my 50 gallon reservoir can literally last for weeks in the spring and fall, and nearly a week in the summer. Note: In camping books, I’ve read that water begins to be undrinkable after 20 days of being stagnant, so I will flush and refill if the water hasn’t been emptied by then.

The problem with this setup became apparent just a few days ago, when things got really cold all of a sudden and we had our first freeze of the year. Some of the parts of the system that were further away from the reservoir began to freeze up and the expanding of the ice inside the lines caused the PVC to fail and burst, which became apparent a few days later when it warmed up again and all the water immediately drained out and everyone was left with no water. It was also 2 days before my wife and I were leaving town for 2 weeks so I had to scramble to get this put back together. On to the winterizing:

So unless you live somewhere where its so cold that the water could freeze in the 45 seconds it takes to make a round through the piping, you’re going to have a solid supply of fresh, nonfreezing water for your animals all winter long. And if you live somewhere much colder, you could beef up the system in one of three ways.

Likely, your best bet for colder weather is getting a larger heater, but you can always start small and get a second one later. They are not very expensive.